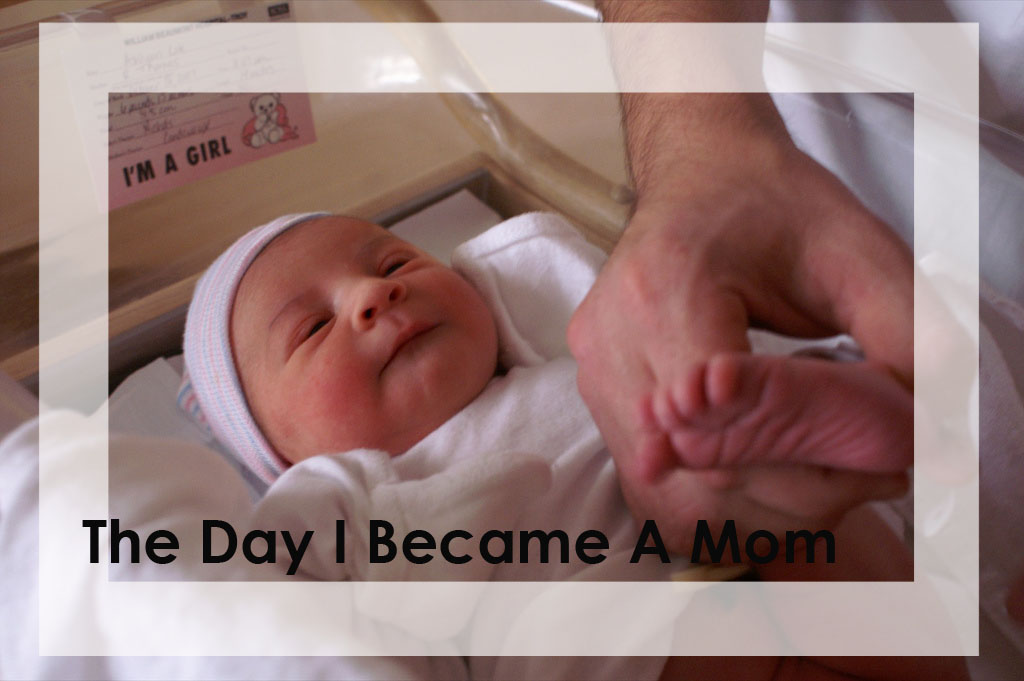 The weather was unseasonably warm for October. And the end of October at that. I left the house in a tank top and yoga pants, instead of the typical fall-in-Michigan jeans and a hoodie prerequisite.

I had called the doctor’s office earlier in the day to tell them something was off, and I was told it was a rainy day with storms predicted later and babies liked to come on days like that.  She figured labor was coming and we would soon meet our baby.

I was 39 weeks pregnant but our little pumpkin had been trying to come since week 32. While I was convinced I would go to my due date, if labor did start now, it wasn’t a surprise. 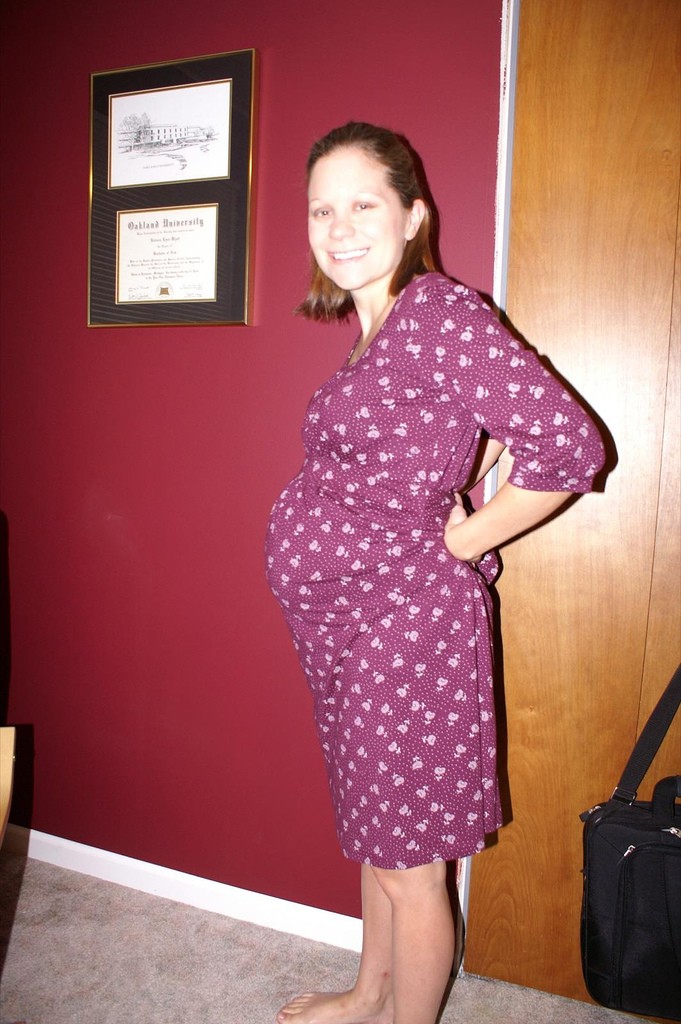 My husband was starting his second day on the afternoon shift and I was terrified to be alone and go into labor, so we decided to head to my parents, which is closer to his work. I would stay there while he was at work and if I went into labor, I wouldn’t be alone. The dog would come with me, and then we would all sleep there and go to my doctor’s appointment the next morning.

Due to an on-the-job accident, my husband and I did not have the ability to prepare for childbirth the way we wanted to. I was home on bed-rest courtesy of pre-term labor and he had his arm crushed in a machine at work resulting in surgery to nearly reconstruct his arm. Our childbirth class went from in-person to several DVDs we watched at home…alone. I do not advise that. I probably would have felt better had I not turned it off every time I got overwhelmed or had I been able to ask questions.

On the way there, I kept getting waves of contractions. This wasn’t anything new. I had been having contractions on and off for days, but they never amounted to anything more than a few hours of pain.

This time, secretly, I was glad we had brought all the hospital stuff. We got almost all the way to my parents’ house and my contractions were six minutes apart and pretty consistent. I called the doctor’s office and they said to head in to the hospital to get things checked out. We dropped the dog off and headed out. It was about 2 p.m.

This was not how I expected things to be. Was I in labor? Was I imagining this? Why was the world still moving around us while I was so terrified?

We got to the hospital at about 2:30 p.m. and checked in. I kept crying because I was so nervous to actually have a baby. The triage nurse wasn’t sure they would keep me. I was dilated to two and my contractions were off the scale, but my water hadn’t broken and they like to see more progress than that. The nurse called my doctor, who was on call and already at the hospital. She decided to keep me, break my water and see where things went. No turning back. A quick ultrasound was done to verify the baby’s position and my labor, which was all back labor.

Back labor refers to the intense lower back pain that many women feel during contractions when they’re giving birth. Some women even feel it between contractions. This pain is usually attributed to the pressure of your baby’s head against your lower back. –BabyCenter.com

At 4 p.m., I got into the labor and delivery room and my doctor came in. We asked her if she thought we’d be there to watch “Grey’s Anatomy.” She said she thought we might be watching it with our baby in our arms.

How could this be? Our lives were going to change so much in the span of a few hours and I couldn’t process that thought. I wasn’t ready. No one has asked me if today was a good day—and it wasn’t. I just wasn’t ready.

The doctor came in and calmly broke my water. It was just a nurse, the doctor, my husband and me sitting in a sun-filled hospital room. I had little idea about anything going on around us. The insane weather for one. It was so serene. The nurse started an IV even though it wasn’t looked up to anything. I had some blood drawn, my blood pressure checked and the baby monitored. After a few minutes, they told us we could start walking the halls to try and get labor to progress.

We started walking the floor. I had to stop a few times for contractions. Back labor is rough. I cried as Jacob held me as I had contractions in the hall. We looked out a few windows trying to distract me, but it didn’t work. After about a half hour, we were back in the room. The doctor came back and checked me and I was at 4 cm. She was hoping I’d be further.

Further? I’m almost half-way through the process. I wasn’t ready. I was beginning to freak out. What was I thinking? I was not ready to be a parent. There was no backing out now.

We decided to try the birthing ball. First, the doctor thought this might help with my back labor if we could get the baby flipped around. Second, it might help get the labor progressing. I moved to the ball. This is where my transition phase kicked in. I was in so much pain I could hardly even do what I was supposed to on the ball. Everything around me was surreal. I couldn’t barely understand words.

The pain was so intense.

As I sat on the ball, I looked out the wall of windows in my room facing west. The sun was glowing orange and the warm temperatures with a cold front on its tail ushered in a tornado warning. I could see storm clouds on the horizon getting ready to rain down on us.

I asked for something to take the edge off and I was told I could have Nubain, which is a narcotic safe for delivery. The nurse administered it as a shot in my IV. Immediately I felt drunk, but still in immense pain. I asked to get back in bed and for an epidural, something I didn’t think I’d ever do. I simply don’t like needles.

I was given an IV to hydrate me before the epidural could come in. This was around 7 p.m. and it was shift change with the nurses. I was really in bad shape with the back labor and would hold my breath and cry through the contractions, which didn’t help at all. The anesthesiologist finally arrived with the drugs. I was checked one more time and told I was at 7 cm. The doctor said there is a lot to be said for getting to 7 cm with no epidural. It wasn’t about the stamina…I just hated the idea of a needle in my spine.

The epidural was started and I felt a little relief, but barely. I was told the epidural may not help with the back labor. I had three contractions before I told Jacob the pain was getting lower in my back and to rub lower.

The nurse said “you feel pressure that low?” The doctor came in, checked again and said I was fully dilated and could start to push.

She apologized for the fact that the epidural would probably not do much for me at this point. I hadn’t had it very long, not to mention the back labor. This meant, I was going to have to push with basically no medication. This terrified me to no end,  yet was still really calm in the room.

How could it be so calm? I was about to have a baby? What if something went wrong? Shouldn’t these people care more about something going wrong? My world is about to change in ways that I can’t even imagine and the environment is still so very relaxed.

This was about the point I began to wonder if the baby would actually fit out. The doctor didn’t seem to have any concern so I just kept pushing. I pushed for a while. It felt like no time. At about 8 p.m. more people began coming in. The light came out of the ceiling and my once dark room was now much brighter. I heard someone say she was there to catch the baby. I knew we were close but I didn’t think we were that close. They turned the baby warmer on and suddenly I knew the time was very, very near.

I remember anytime anyone would talk to me, I would concentrate on them really intensely because I had to. I kept thinking it was all a dream. The physical feeling of delivering a baby was nothing that I ever could have prepared myself for. Not to mention the emotional effects. They would reassure me I was doing great. I kept telling the doctor I was really scared. She said everything was going really well.

There was a lot of pushing, a little cord unwrapping and a lot of people telling me that I was so close.

There was a long delay and someone finally said “it’s a girl.” It hadn’t even dawned on me to care. We didn’t know in advance and I had been curious about this little detail for nine long months, yet at that moment I was just happy the baby was finally there. I had survived the birth of my daughter.

The two days we were in the hospital were a blur. Family visits, hearing tests, shots, examinations, breastfeeding videos, lactation consultants, taking in the baby, trying to sleep…and in all of it, I kept waiting for someone to give me permission to be her mom. I was afraid to feed her, change her and even put her in the car seat.

Nine years later, I still can’t believe I’m her mom. I’m pretty lucky. She’s a pretty cool kid. She loves deeply. She hugs me tighter every day. She wakes up happy and goes to bed with a smile on her face. I still sometimes dream about the birth of my daughter and meeting her for the first time.

Those nervous moments in the delivery room…well, they’ve only changed over time. Now I’m concerned about other things. I know now that the fear didn’t end when the baby was born, or when we were home, or when she could roll over, or talk or walk or went to school or whatever. The fear of being a parent is real and it’s lifelong.

I just hope that God can always provide me with the peace that was in the hospital room the night she was born. That night, those memories, the people there…it will forever be etched in my brain.

One thought on “The day I became a mom: The birth of my daughter”