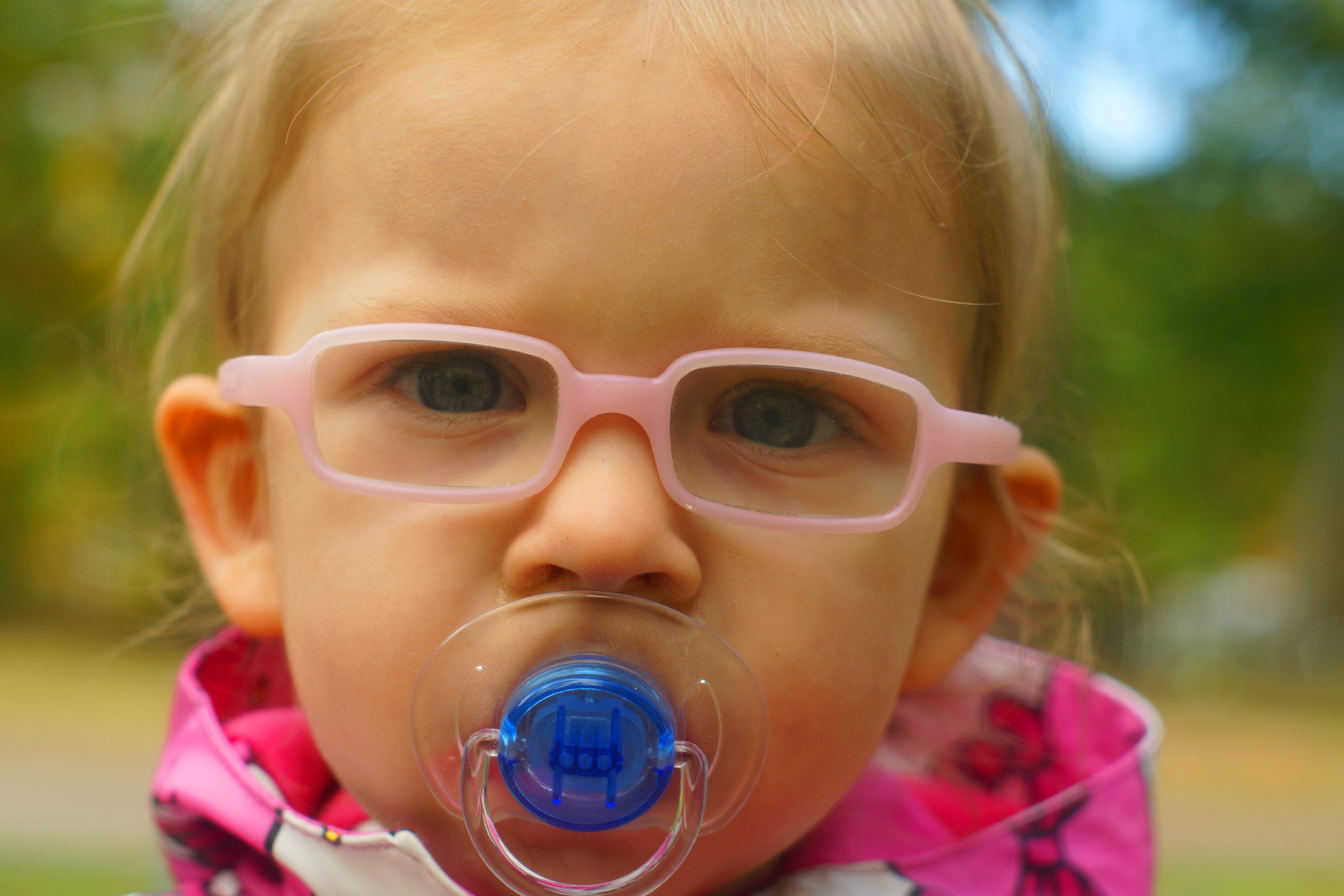 When my middle daughter was three, my husband was quizzing her on numbers using the digital clock on our kitchen stove. He asked her what the numbers said. She replied by tilting her head down, squinting her eyes and telling us she needed to get closer. When she moved toward the stove, she read the numbers perfectly.

“You have to get her eyes checked,” my husband said.

During a routine doctor appointment, I mentioned that she seemed to have some strange tendencies–squinting, looking down, etc. The pediatrician sent me to a pediatric ophthalmologist where it was determined my little preschooler needed glasses.

History repeated just a few years later when we noticed our 1-year-old had a drifting eye. One trip to the ophthalmologist proved that it wasn’t just an optical illusion.

So with two out of three of my kids wearing glasses, I have some tips for kids in glasses that might be useful.

1. Go with Miraflex frames. If you have a rough and tumble kid or a youngest under 3, it’s probably best to go with the most kid-friendly frame available. These glasses are just one piece, there are no screws or hinges. They are typically held on the child’s head with an elastic band. At night, we bend them back and either put them in a case or use a band to hold them so they maintain their shape.

2. Zenni.com is great for extra sets of glasses. I typically purchase a pair from a local shop and then order extra sets from Zenni. This doesn’t work for the Miraflex as they don’t carry them, but it’s worked out great for our middle daughter. Glasses are as cheap as $9.99. Just make sure you have a copy of the child’s prescription as well as their papillary distance before ordering. This way, if a pair gets broken, which they will, you have an extra set.

3. Check your insurance. Last summer, three months after we got new glasses for our middle daughter, we were staying in a hotel six hours away from home. She was swimming in the pool and her glasses were on a table nearby. My mom accidentally dropped them and a lens got really scratched. While it was annoying for my daughter until we got home (see the next tip), I felt confident in the repair because I purchased insurance. When we returned home, I went to the eye glass shop to get them fixed where I was informed that my insurance covered normal wear and tear…not something like a deep gouge. Um, what is normal wear and tear for a kid? Shouldn’t we expect scratches? We worked out a deal, but I seriously question whether I should spend the $30 in the future.

4. Always carry a spare set out of town. Twice we have had glasses break or get scratched while we were on a trip. For my middle daughter, this is really problematic. She can’t read or see well without her specs.

5. Ask your eye doctor for help. My daughters never really gave me an issue when it came to wearing their glasses. I think it improved their vision so significantly that they would rather wear them then not. However, our doctor told us she could do some things to help us should either of them put up a fight. They can use special drops or ideas for keeping patches on if those are needed.

6. Soap and water are the best cleaner on the go. There are special little wipes that work for glasses, but if we are on the go and french fry fingers touch the lenses, soap and water will do the trick.

7. Follow their lead. I don’t wear glasses full time and neither does my husband. We didn’t realize that a walk in the rain would be an issue for our glasses-wearing girls. The first time I had to carry glasses because of water clouding her vision, I learned to take them off before we ventured out. I also never consider temperature difference and fog. I let them tell me when they need to take them off or have them cleaned or whatever the case may be.

I never expected to have two children with glasses. I distinctly remember my dad’s reaction when he found out my middle daughter was going to need glasses. He wore glasses his entire life until he had vision correction surgery in his 40s. He said he felt bad for her. However, neither of my kids seem incredibly bothered by them. I hope that trend continues.

3 thoughts on “Seven tips for little kids in glasses”