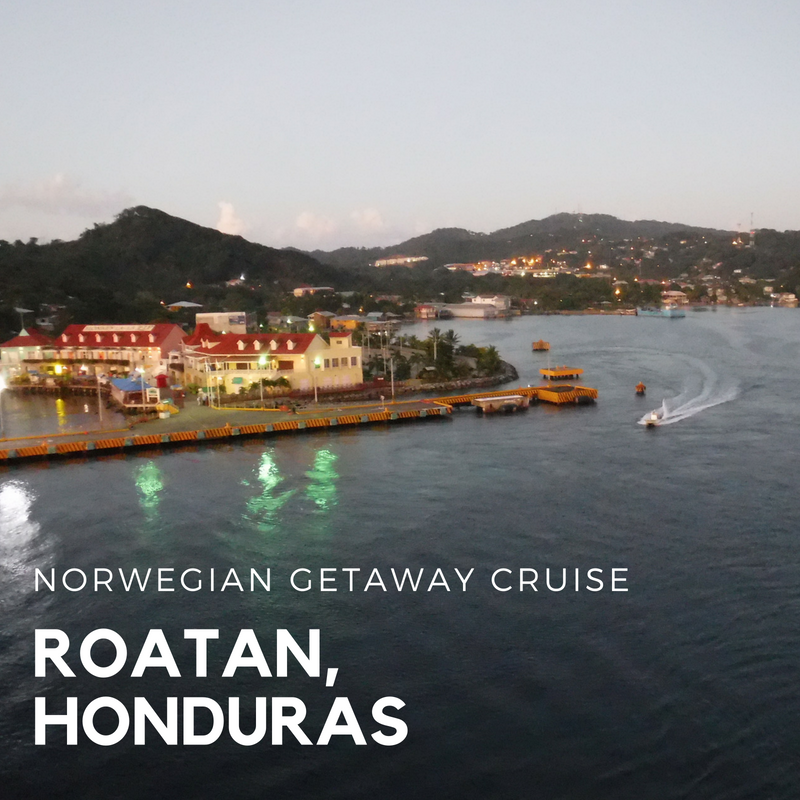 My only connection to Honduras is Lisa “Left-Eye” Lopez.

I’m pretty sure that’s where the TLC singer-rapper died in a car accident like years ago. And the only reason I know that is because I used to have a subscription to People magazine.

Before we arrived in Honduras, I had no idea what to expect. The excursions we chose was to Big French Key. I had seen something other excursions that offered the opportunity to see sloths and monkeys and other exotic animals, but they sort of reminded me to the over-touched shark that we saw on our honeymoon—basically, they are just a tourist attraction.

We arrived in Honduras to a small strip of shops, dancers, music and the like. We browsed a few of the shops, but they weren’t the big shops we were hoping for. We did buy a new bag to lug around our stuff. We also purchased some over-the-Honduras-counter treatment for a fever blister that my husband sprouted overnight.

Side note: Legal or not, that stuff worked really well.

We had a little bit of time before our excursion so we shopped around, looked at plenty of handmade goods and then met up with our tour group, and our tour leader Daryl.

He took us to a ridiculously small-seated bus. I don’t mean the bus was small, I mean the seats were actually small. No American booty was meant to fit in those seats. We made the drive, which was about 20 minutes long, down the winding Honduran roads. There are no traffic lights or stop signs, and, in fact, we saw an accident on the way. There are no speed limits or lane dividers. I often felt like we were playing chicken with the on-coming traffic.

What it lacks in technology, it makes up for in beauty. Lush greens, blue seas and sunny skies.

Daryl provided us with plenty of information about Roatan and the culture while we were driving. The roads rivals the ones in Detroit. Pot-hole filled and bumpy!

We arrived at the boat, which drove us about 3 minutes across a small bay to the Big French Key. We signed waivers once we were on the island. We had access to the beach area, kayaks, paddleboards, beach chairs and more. There were also souveniers, hair braiders and food.

Our package included two drink tickets, lunch and snorkeling. We got a drink and settled into our beach chairs to get a little sun. Just as we were getting warmed up, Daryl came over to let us know that we would be handing out on our snorkeling adventure soon. I was excited. I love snorkeling!

We got on a boat and were given fins, masks and snorkels. The boat drove us around the key and out into the ocean for the snorkeling. One by one, we jumped off the boat and into the ocean. I figured there was no time like the present and I was one of the first off the side of the boat with Jacob.

Chilly! But I warmed up.

Honduras is located on the Mesoamerican Barrier Reef System. It’s the second largest reef in the world, only behind the Great Barrier Reef in Australia.

It took me a while to get my breathing under control and comfortable with the waves and the current. I stayed close to Daryl, who was pointing out cool things to see. I only went as far as my snorkel would go under the water. Some of the others could drive down and come up, expelling the water out of their snorkel when they hit the surface.

We saw blue tang, neon fish, beautiful pieces of coral and clear, clear water. We swam around the reef and to the drop off, where the bottom went from visible to an abyss. We swam around and met up with the boat once again, to take us back to the Big French Key.

Once we were back on land, we decided to take advantage of our included lunch. There was a local meal of black beans and rice, chicken with peppers and onions, fish, plantains and coleslaw. It was actually really good. I was nervous about eating the food at first, but it was fine. 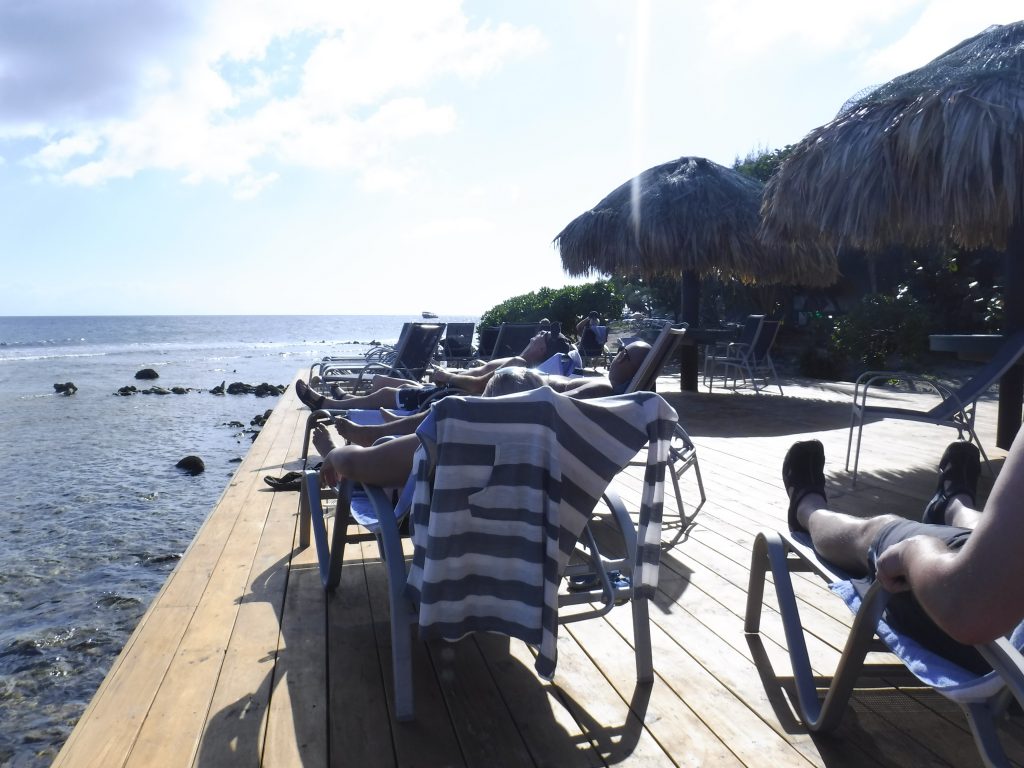 We resumed our positions in our chairs on the deck, had a few more drinks and just soaked up the Honduras sun until it was time to board the boat for the short ride back to the mainland, the super tiny-seated bus and the crazy drive back to the boat.

We arrived back in the little shopping area and still had some time before we had to be back on the boat. Then we went up to our balcony rooms and watched Roatan fade away. 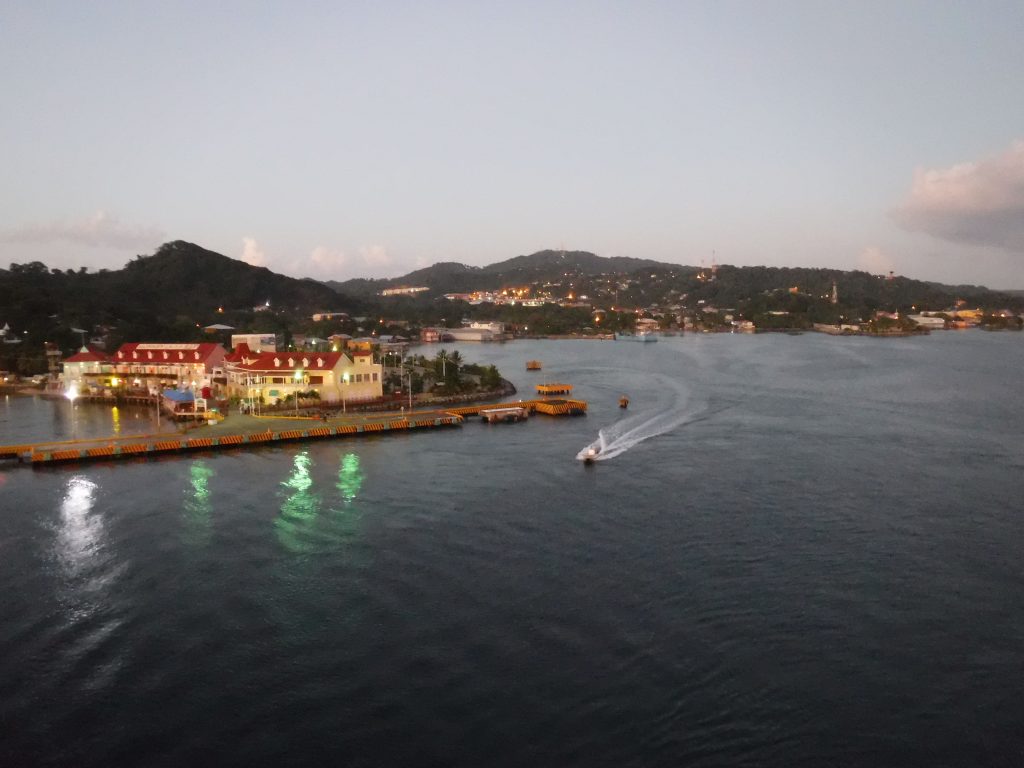