When we took our first cruise in 2011, there was plenty of on-board entertainment, but booking in advance was the wave of the future and we could just show up at show start time and get a seat. This time, Norwegian wanted us to make reservations for shows in advance. We wanted to see Cirque Dreams and Steam, which was a dinner show and took from our speciality dining package. It seemed like the perfect pick for our first night at sea.

The show wasn’t scheduled to start until 8:45 p.m. With a long day already behind us, it felt late, but we took some time to rest before we went. All of the excitement of the day had really caught up to us! But it got dark out at about 5:30 p.m. so it wasn’t a big deal to take a little down time before the show.

The show was written up in the Freestyle Daily (ship newsletter) like this:

That means very little to me, I was definitely interested in seeing the show.

We entered the Illusionarium and were completely blown away. It was amazingly decorated and there wasn’t a bad seat in the house. The “floor” seating, as it was billed, was closer to the stage. We were at tables in the back, which were incredibly comfortable and we could see just fine.

The staff was dressed in steampunk style garb. They offered us drinks and then gave us a menu to let us know what we would be eating. We were given the salad appetizer first, followed by the surf and turf with fries and spicy (!!!) broccoli, then finally a plate of three different desserts. The food was fantastic.

During dinner, cast members would come out dressed in incredibly elaborate costumes. We got up from time to time to have pictures taken with them. The ship photographer took the pictures and apparently they were lost in translation because they never appeared in our photo binder or on the wall of unclaimed pictures. It really bums me out because I didn’t take pictures of my own. I’ve pulled these pictures from the Internet to give you an idea of what it was like: 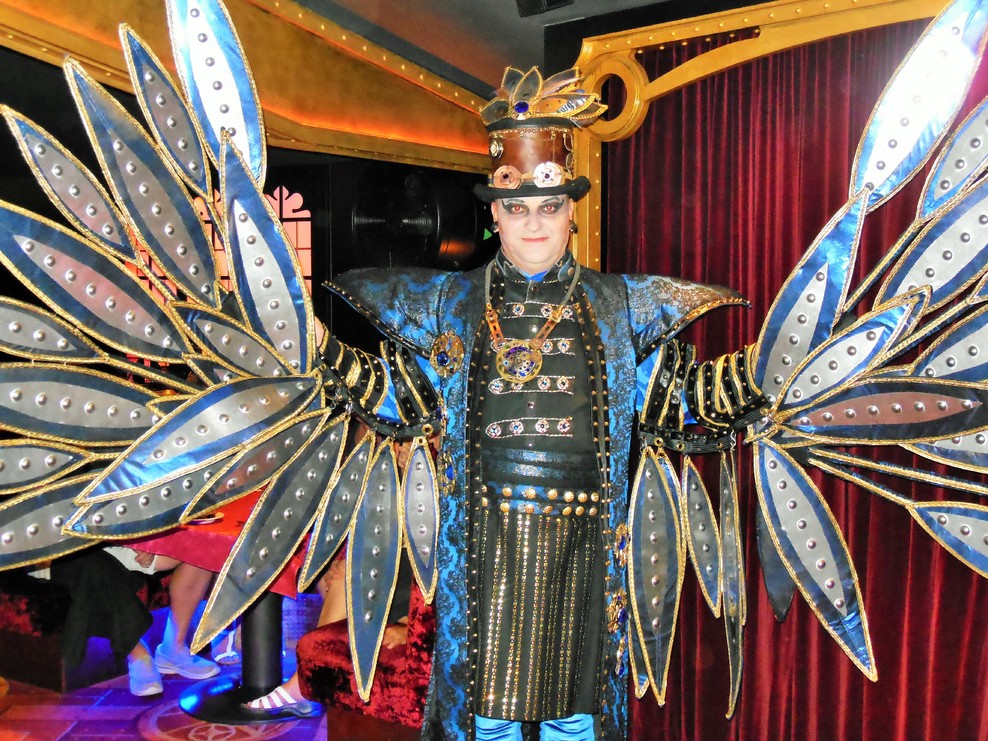 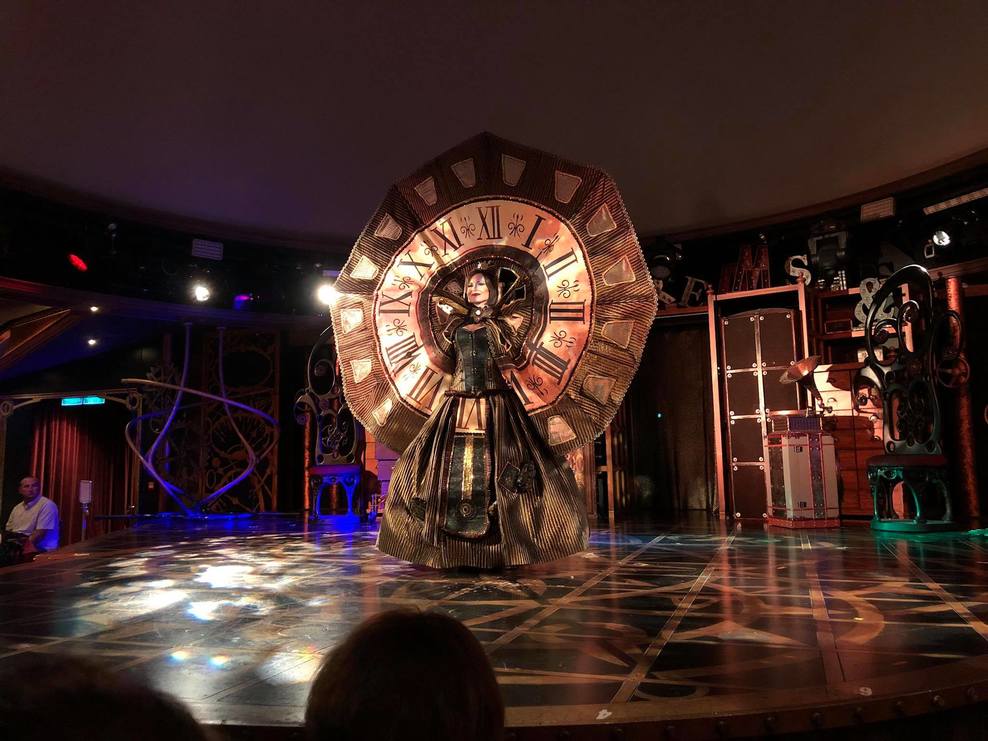 Once we were on the third course of the meal, the show began. I’m not even sure how long it was but it could have gone on all night and I would have been okay.

There was no photo or video allowed during the show and I complied, so I have nothing but a few pictures of the Illusionarium to share.

There were amazing acts of balance, flexibility, strength and dancing. There was a acrobatic biker, a sword thrower and his assistant, acrobats hanging from fabric…the whole deal. If you’ve ever seen a Cirque du Soleil show or even a Cirque Dreams show, you know what I’m talking about. It was the best way to kick off the cruise. 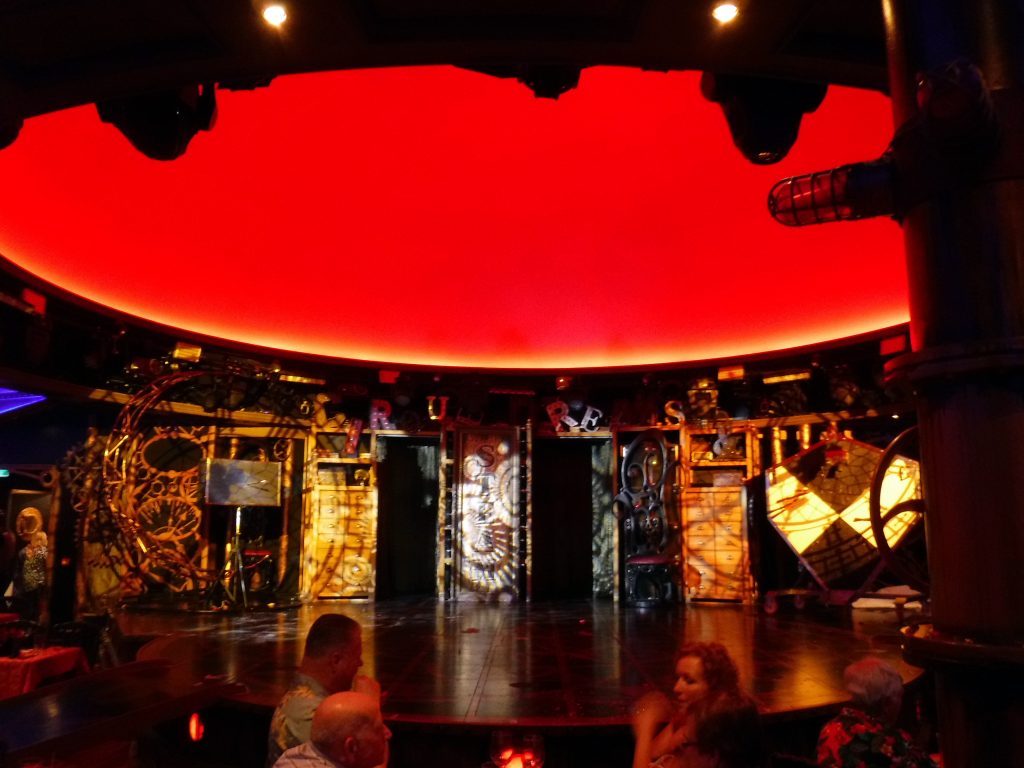 This was included in our dining plan. We had several speciality meals planned for the week and we budgeted for this one. However, at a cost of about $35.99/person for dinner and a show, it would be totally worth it even if you didn’t have the dining package. Plan for it!

There was a little interesting event that occurred during the show. We didn’t realize what it was until later.

So we’re watching the show and the music completely cuts out and an announcement starts over the PA system.

Now, there are lots and lots of announcements on the cruise ship. They announce game starting, where to find the action and things of that nature. However, this was different. First of all, the music stopped. That was my first clue that something was wrong. I could not imagine that they would interrupt a “paid” show to let us know about the next round of Bingo. The call went like this.

I looked around for some type of panic on the faces of the workers or the act. To their credit, they kept going. I was worried though. Code Bravo? Incinerator Room? This felt really uncomfortable. Really. WHAT DOES IT MEAN?

I got back into the show, assuming that shortly thereafter we would hear the emergency tones and be heading toward our muster station just hours after practicing an emergency drill.

Then, as if to reassure me that I wasn’t crazy, the music stopped again and the announcement started:

It wasn’t until two days later when we were in Honduras and had a cell phone signal that we Googled it.

Code BRAVO
Fire or smoke on board

Had I know this when it was going on, we would have left that show and headed for the incinerator room on Deck 5 so that I could assess the situation for myself. So, I guess it was a good thing that I was completely oblivious and the staff stayed incredibly calm.
After the show wrapped up, I grabbed a few pictures of the venue and then we headed up to our room. We were exhausted. While I wanted to spend more time exploring the ship and hanging out, I quickly realized that we were just at the end of the very first day and it wasn’t worth wearing myself out completely and being tired the next day.
And this is just the beginning of our trip! I can’t wait to share more of our adventures.
If you are just joining us, I’ve also written about our flight, our hotel the night before the cruise and Embarkation Day! 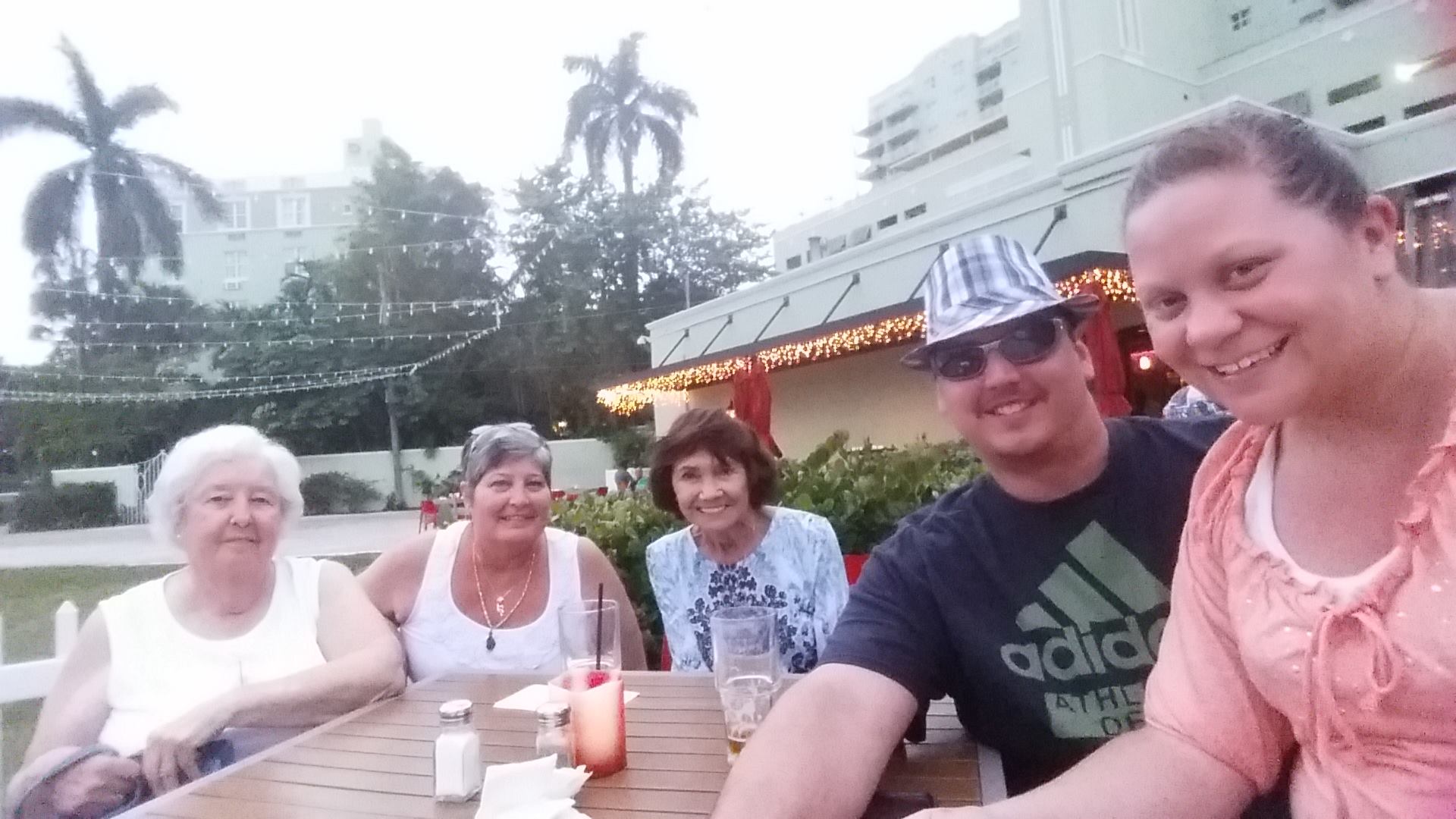 One thought on “Norwegian Getaway Illusionarium Cirque Dreams and Steam”