Anxiety My Life Self Improvement The SAD Reality

“Just say it out loud,” my doctor said to me. I was in his office for about the third time that month. I was certain I was having issues with low blood sugar. Or I was dying of a brain tumor. There was really no in-between. “Sometimes it can help.”

“What?” I thought to myself. “That’s stupid. How can that possibly work?”

But I said it, “I might be having panic attacks.”

“Good,” he said. He knew all along that’s what was wrong with me. I just didn’t want to admit it. “Now, when it’s happening, say it out loud.”

So I did. Instead of getting fidgety, breathing rapidly and then freaking out that I might pass out, I started saying, “I might be having a panic attack.”

Did it take them away? No, but it addressed the elephant in my mind.

But now, I say it out loud all of the time.

I have anxiety and depression. I live with emetophobia. I have diagnosed obsessive compulsive disorder. I see a therapist. I take medication. I’m not ashamed.

I have this idea in my head that if I keep something to myself, it makes it less real. The world doesn’t know. They don’t look at me differently. It’s like announcing a pregnancy. It becomes a lot more real when the world knows and they can celebrate with you. However, it’s also like announcing a death, when people mourn with you.

Withholding. No, that’s not the right word. Suffocating (that’s better) under the weight of things going on around you isn’t fair, especially when you have a strong support system and people want to know and want to help. Or at least understand.

A few years ago, the day after my grandma died, my husband and I went to a taste-fest party with some friends. There were a lot of people at the event. Some I knew well, some I barely knew at all. While I said nothing about my grandma having just died, I know I was coming off as aloof or impersonal, but no matter what I did, my mind and body were just plagued with this overwhelming sadness. I couldn’t even come up with the energy to stay. I just wanted to go home. As I look back, I realize had I just said, “Hey, my grandma died about 24 hours ago,” it may have been easier for people to understand my actions, but not only that, it gave them the opportunity to support me.

We’ve always known that I had an “aversion” to vomit. Who doesn’t? That’s all I could ever tell myself. No one likes it. I’m not alone. But the paralyzing FEAR that comes to me from vomit isn’t the same. It causes raging panic and unsettled feelings. Once I had finally done some research and realized I wasn’t alone, and it had a name, emetophobia, I said it out loud.

And I wrote about it.

Do you know what happened? People came out of the woodwork. I got messages like, “Can you talk to my friend? I think she has this too and she’s curious of how you deal with it?” and “I think my son has this!” and then people shared that they knew about it, had it and had even more information on treating it than I did.

Community. Even emetophobes have a community. And it provides such a relief.

As I recovered my my ACDF surgery, I shared Instagram pictures with the hash tags #ACDFsurgery and #ACDFrecovery. At least twice, random strangers contacted me through Instagram to inquire about my surgery. I referred them to a Facebook group that had given me a lot of support.

I promise you that if you say, “I’m really nervous about the storms coming today,” or “I’m a bit anxious because I have this radiating neck pain that’s been going on for several weeks,” people are not going to think you are any less. They won’t think you are a hypochondriac. They won’t judge you. Well, maybe they will, but YOU will feel better about your place and where you are. 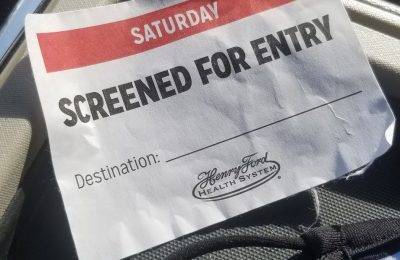