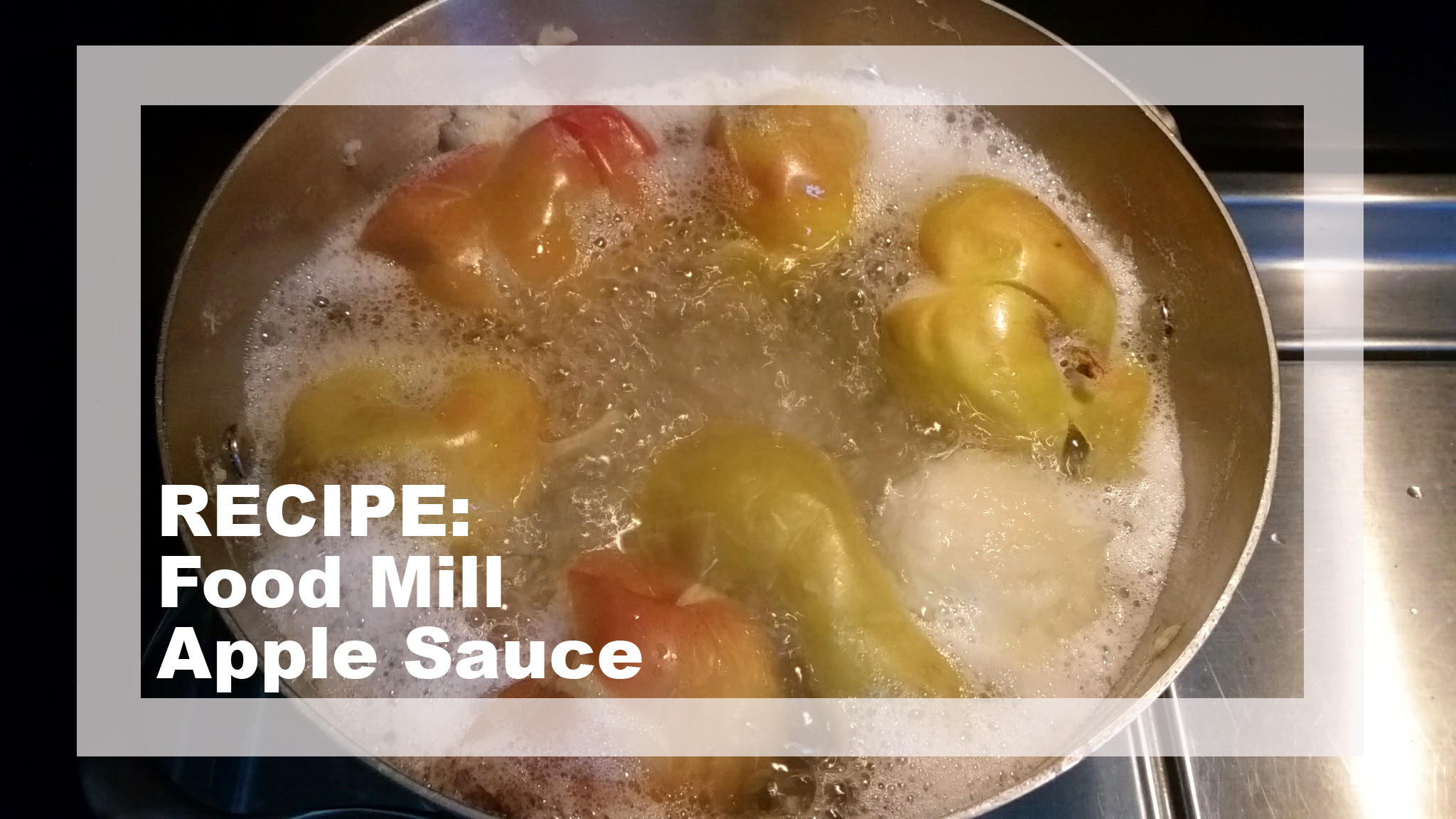 We recently went apple-picking and brought home way too many apples. Of course. So, I did what any apple-lovin’ person would do…I set to work making all sorts of treats from the fruit–including  food mill apple sauce.

My apple sauce is easy. It’s so easy that it’s ridiculous actually.

In previous years, I would core and peel the apples, bake them and then use the food processor to blend them. And that is why I hated making apple sauce. The process was long and complicated and for a few bucks, I could just grab a jar from the grocery store.

A few years ago, a coworker was telling me that I was basically doing it wrong. She said all I needed was a good food mill and lots of apples and I was good to go. What is a food mill? Where do I get one? Thankfully, she showed up a couple of weeks later with a food mill she found at a garage sale.

In case you don’t know, a food mill sort of looks like a pot with a few “legs” on it so that it can hook onto another pot. It has a crank in the center that moves a large “paddle” around a sieve—smashing up the food. My description is horrible.  Here is what Wikipedia said.

A food mill (also called passatutto, purée sieve, moulinette, mouli légumes, or passe-vite) is a food preparation utensil for mashing and sieving soft foods. Typically, a food mill consists of three parts: a bowl, a bottom plate with holes like those in a colander, and a crank fitted with a bent metal blade which crushes the food and forces it through the holes in the bottom plate as the crank is turned.

And here is a picture of one that looks like mine, just for visual reference. 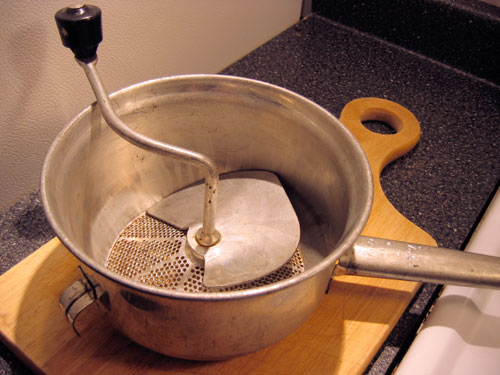 After I used the one I was given a few times, it started to rust. Obviously I couldn’t use it so I had to throw it away. I went back to the food processor method and hated it. I vowed to get another food mill. This spring, at a garage sale, I found one for $1. Well worth the investment!

My former coworker was right…it really is SO easy.

Here’s what you need:
A bunch of apples
A big pot
A food mill
A container in which to put the apple sauce (I used just another pot)
Sugar and cinnamon to taste

And here we go.

1. Wash the apples. Some orchards use pesticides and chemicals in the growing process. Not to mention the fact that you’ve handled the apples. Yeah, it’s time to wash them. Give them a rub-down in the sink.

2. Add the washed apples to a large water-filled pot on the sink. Fit in as many as you can, but make sure they are all covered by water.

3. Boil until the apples until they soften and the peel begins to loosen.

4. Remove the apples a few at a time as the food mill can accommodate them. Then, turn the mill and squash the apples to sauce. The best part about this method is that the stems, peels, seeds and any tough parts won’t go through the sieve part of the mill, so the apple sauce is smooth.

5. Add sugar and cinnamon or one or the other to taste. I use very little sugar and rarely use the cinnamon. If we want it, we can always add it after. I hate to disturb the integrity of the apples. Or something like that.

I made a lot of this stuff because we had so many apples. I knew we wouldn’t be able to eat it all before it went bad so I put it in small mason jars and put it in the freezer. I’ve done this before so I know it will be great and tasty when we thaw it.