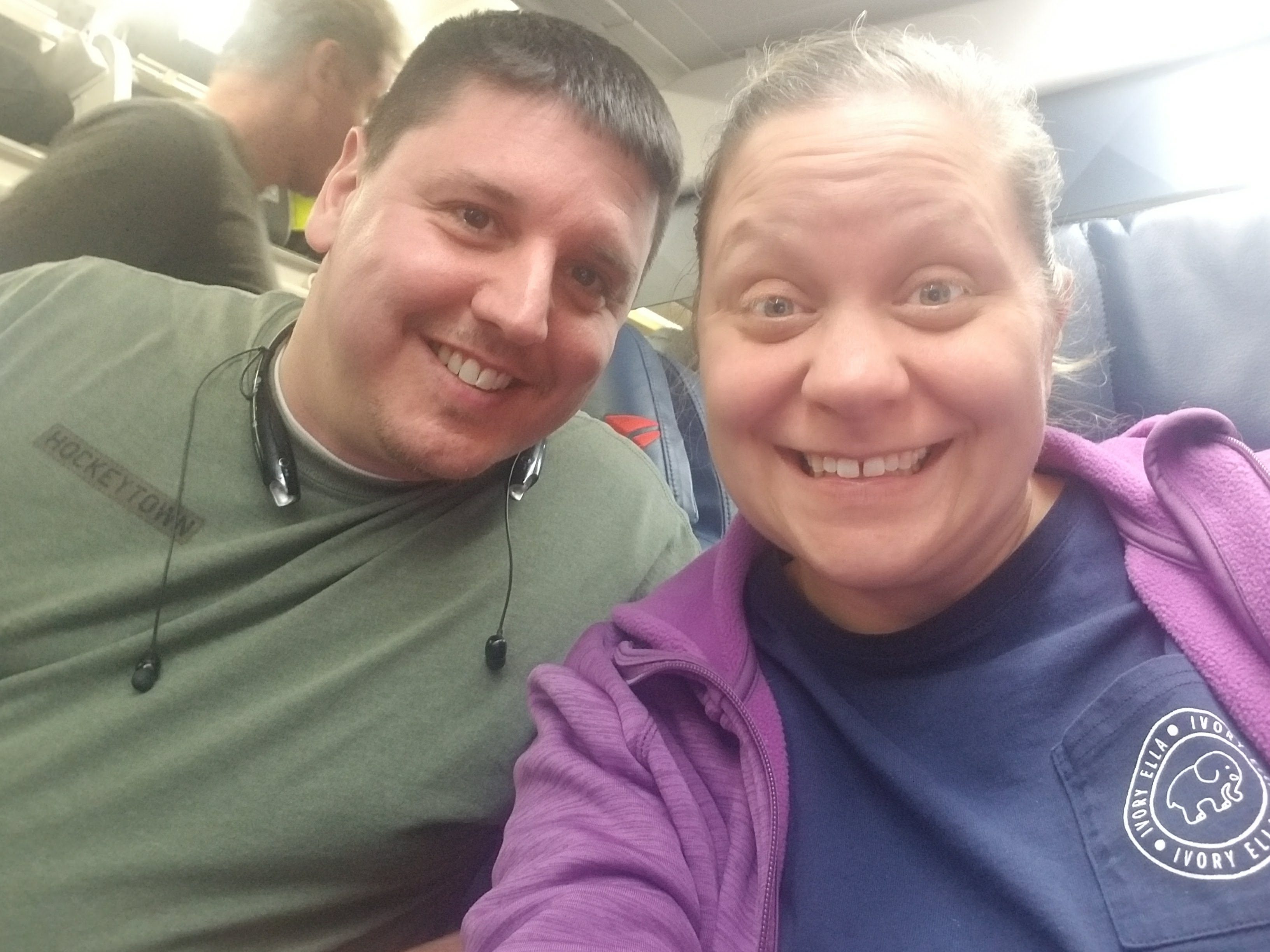 At least that’s what my husband says.

We flew Delta Flight 2535: Detroit to Miami on Saturday, Feb. 3 to catch a cruise in Florida. We sort of ended up in first class, but according to my husband, I’m not allowed to sit there anymore.

Though he says it in jest. I think.

We had booked these tickets months ago, in fact the same night we booked the cruise. We used miles from our Delta credit card and it cost us all of about $50 to make the trip. We picked out our exit-row seats for a little extra leg-room for my over-six-foot husband.

It came time to check-in to our flight to Miami and we weren’t able to complete the process online. My husband loves to check in right at the 24 hour mark. He was super frustrated so he took his frustrations out on Twitter. Some Delta rep responded to his questions right away and we learned the reason we couldn’t check in was because we were upgraded from exit-row to Economy Comfort.

My highly extensive internet searching led me to this:

Economy Comfort seats are the same exact width as normal coach seats, except they have up to 4 inches more of legroom and 50% more recline.

I mean, I guess that’s cool. It wasn’t a huge deal to me because I’m not that tall to begin with and I hardly ever recline my seat because I hate when people do it to me. Maybe I’d care more on a longer flight, but most of the time, it doesn’t matter.

What we didn’t realize was that our names were put on a list for first-class seats if that flight didn’t sell out of them. When we went through the Sky Priority luggage check line, the woman at the counter said our odds of first-class seats were slim. Aw, well, the dream was nice while it lasted.

When we went to board the plane, the screen flashed our initials and said there was a change to our boarding pass. Sure enough, we were bumped up to first class. My husband was really excited. First class wasn’t anything more than sitting at the front end of the tin can hurling us through the sky.

Um, except I was wrong.

The moment I sat down (on my seat with a pillow and blanket), there was a flight attendant there asking me, “Mrs. Thomas (yes, they used my name), would you like something to drink?”

I said no. My husband ordered up the first of his Captain and diets. He said, “These drinks are free so get one if you want it.”

I was so nervous about the “hurling us through the sky” part that I thought I might actually hurl into my lap. I passed on the libations. Again, before we were airborne, that attendant came around again and my husband got another drink while I passed.

Take-off was quick and uneventful. And just as the plane started to level off, there was our flight attendant again.

“Mrs. Thomas, can I get you anything?”

I wanted to respond with “a seat on the ground!” but instead I said, “I’ll have a Coke or Pepsi, whatever you have.”

And guys, guess what? It came in an actual glass! I wasn’t given a can and a plastic cup that I would inevitably crush in the seat-back pocket when I was done with my pop. No, this was an actual wash-it-in-the-sink-and-reuse-it glass!

Then came the basket of treats. There were things like candy bars and cookies, bananas and some other goodies.

Cue the look from my husband. As soon as our flight attendant walked away, he said “Don’t you want anything?” I said, “No, we just ate and it’s not a long flight. I’m fine.” He responded with, “But they are free!”

Then he ordered another drink.

And I rolled my eyes.

I settled into my seat and loaded up GoGoInFlight, Delta‘s on-board, wifi-based app with movies, a map of the flight, etc. I started Anchorman but decided I wasn’t in the mood and switched over to something I hadn’t seen before, Table 19. I got into the movie and barely noticed most of the flight. After the flight attendant came around a few more times and my husband ordered a few more drinks, I loaded the map. We were already nearing Atlanta!

The moon was rising to my left and I actually stopped my movie to take a few pictures. My camera could no do it justice.

Another drink for him and back to the movie for me.

With our TMobile plan, we get one hour of wifi on Delta flights. I used that to Facebook message a few friend, including two who were on the flight with us.

Then, turbulence. Like throw the plane around turbulence. I quickly flipped over from the crazy ending of Table 19 to see where we were on the map. Almost to Miami! I could handle the turbulence for a few minutes. We circled around and lined up. We were finally landing.

Considering that the weather was nice and calm in Miami, our landing was smooth and almost 45 minutes early. We taxied to the gate and, with our first class seats, got off the plane really quickly.

Aside from the vomiting-child we saw getting off the plane, it was uneventful. Yeah, that’s super fun for the chick with emetophobia.

Except, my husband said he wasn’t taking me in first class anymore. Apparently I don’t fully appreciate, or use, the benefits of first class. Like the free drinks and the snacks. So if you ever see my husband in first class, while I am in coach, you’ll understand why.

Side note: We’re super spoiled by our airport in Detroit. It’s clean, it’s modern, it has a ton of restaurants. I was surprised by the lack of…well, anything…in the Miami airport.

We picked up our luggage from baggage claim (this will come up again, turns out, one of our brand-new bags was damaged in flight) and hopped on the shuttle to the hotel.

We were finally in Miami. There was really no turning back! Only 12 hours separated us from the start of our long-awaited cruise vacation. First, though, four adults had to spend the night in one hotel room together. That was fun! 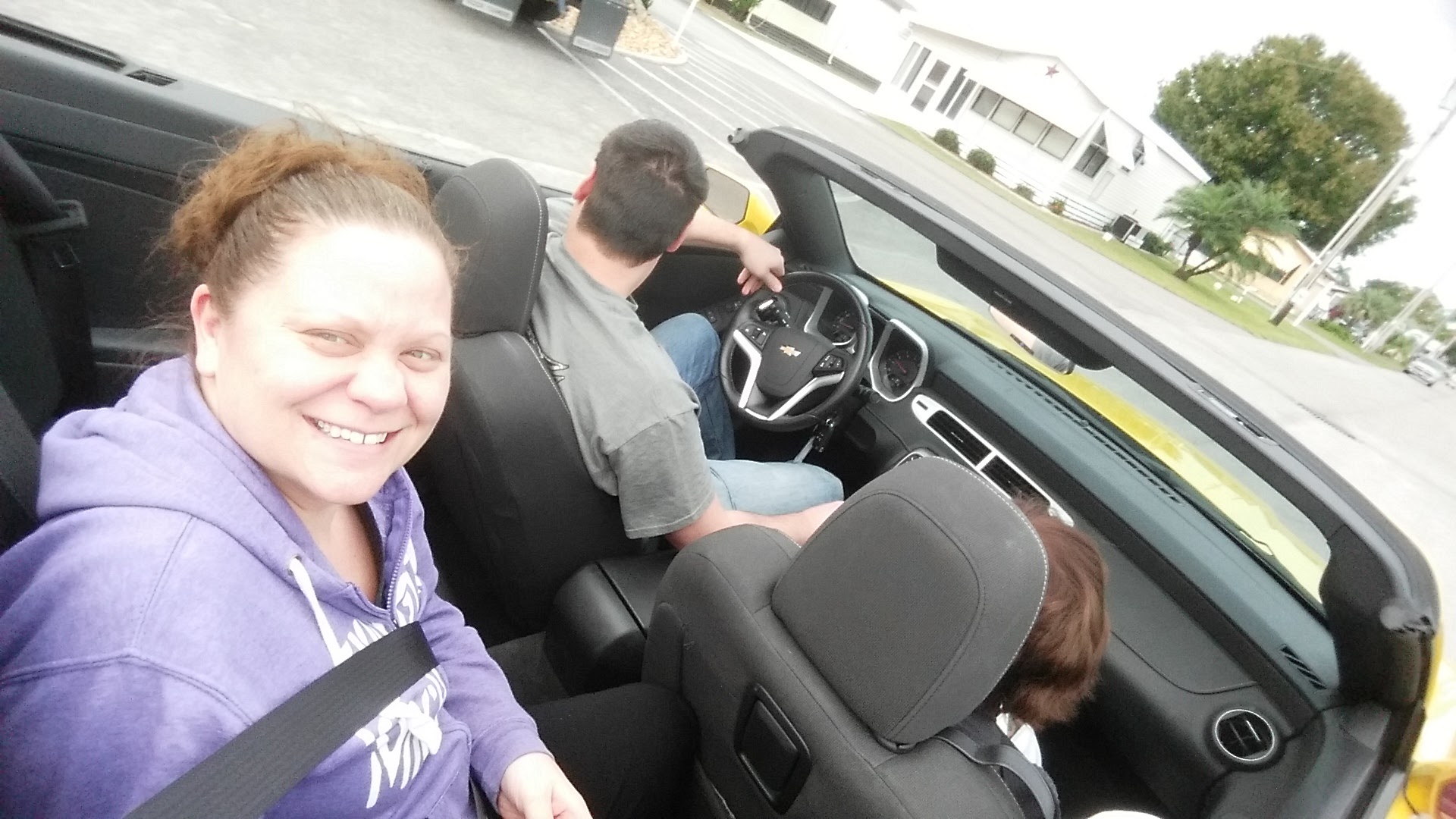