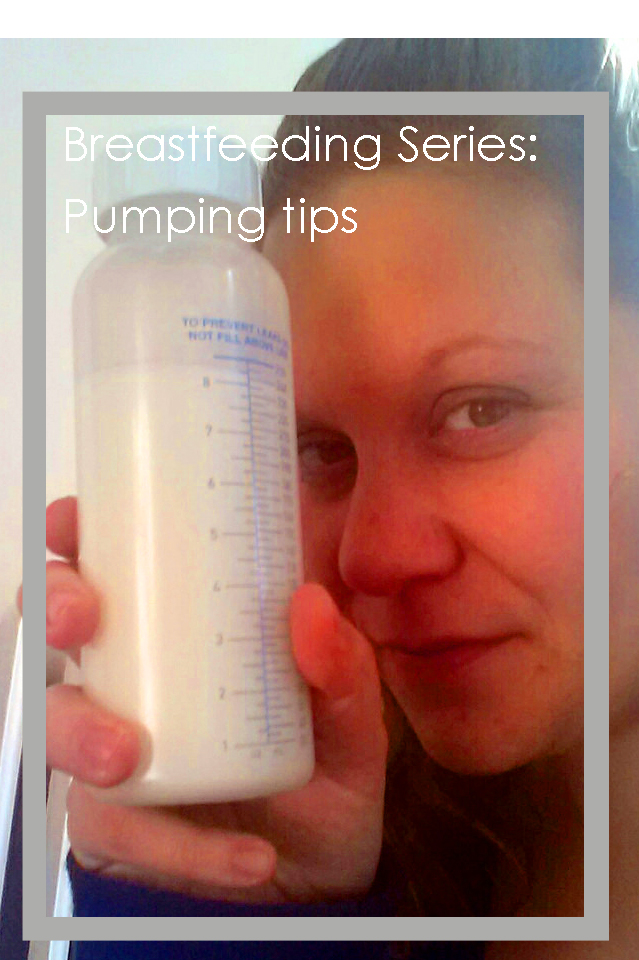 The first time I opened up my breast pump, I couldn’t figure out where all the hoses went and how it was supposed to turn on and what in the world were those horn-looking things for? I was terrified of it. But with incredibly short maternity leaves, I needed to establish a hardy supply. By the time I finally retired my breast pump, I had figured out how to pump everywhere from my car while driving to the bathroom floor at a Detroit Lions football game. I had mastered it and now I’m going to share the wealth. Here are my pumping tips.

My pumping routine fell in step with my nursing routine. For the first few days home, I’d pump for about 15 minutes after each feeding, but slowly cut my pumping sessions back to 2-3 times per day. I’d store the milk in a bottle in the fridge until I had 3, 4 or 5 oz. Then, I’d put them in a milk storage bag, stack them in my milk storage container to make them flat and then store them in the freezer.

Three ounces lasted until she was about 3 months old. Then I moved to 4 ounce bags and capped at 5 oz. My middle daughter never took more than three 5 oz bottles at day care and my last went through a phase of reverse cycling–which means she didn’t take a bottle at all at day care, but nursed all evening.

Once they were flat, I’d rake them out and store them in boxes in the basement freezer. Milk in a deep freezer can be stored for up to a year. This was never really an issue as I always did first in, first out.

To make things easier, I always kept the milk in the upstairs fridge until I had enough for 3, 4 or 5 oz pages. Almost every bag in this picture is 5 oz because I pumped them when my daughter was 4-6 months old.

Oh and one more tip for pumping at home. Keep the catch bottles and the horns in the fridge too and then I cleaned them once per day rather than every pumping session.

Pumping on the Go

I liked pumping in the car. With my first daughter, anytime I was the passenger to my husband, I would pump. Onec I got good at connecting everything, I began pumping as a driver. I’d pump on my way to work, meaning I had a solid few hours once I got there, and on my way home.

I figured there was no better time. I was just sitting there and I had the time, so why not?

So, how did this all work?

Well, I always wore a nursing tank under a shirt. I’d loosen my top shirt just enough to get the horns under it and then wedge them between my top shirt and my nursing tank. This sometimes meant I had to use the 8 oz bottles to catch the milk as I could prop them up on my thighs, but I could do it with the 4 oz-ers as well.

I’d plug the pump into the cigarette lighter and put it on the floor of the car. I could easily reach the dial to stop/start it if I needed to.

Once I had pumped for 15-20 minutes, I’d disconnect everything and leave the milk containers in the cup holders until I got where I was going. I’d use nursing pads to wipe up any drips, pull down my nursing tank, straighten my shirt and be on my way.

I’d also pumped during a day-trip to Chicago. I pumped after I had gone through security but before I boarded. Then I pumped after the hour-long flight (give or take a bit for boarding, taxiing, etc.). My boss (oh, yeah, my male boss so that was fun) took the El into the city. Once we got to our destination, a hotel, I inquired about a place to pump. These amazing people gave me a hotel room to pump in. I could have kissed them. I did the same on the reverse trip. Pumping before we boarded and again when we landed. Apologizing to my boss for every 20 minute delay. He was a saint.

The only downfall to all of that pumping was that I couldn’t save it. I was taking Xanax to fly and that isn’t good for baby so I had to pump and dump. It was a sad, sad day to watch that milk go down the drain. 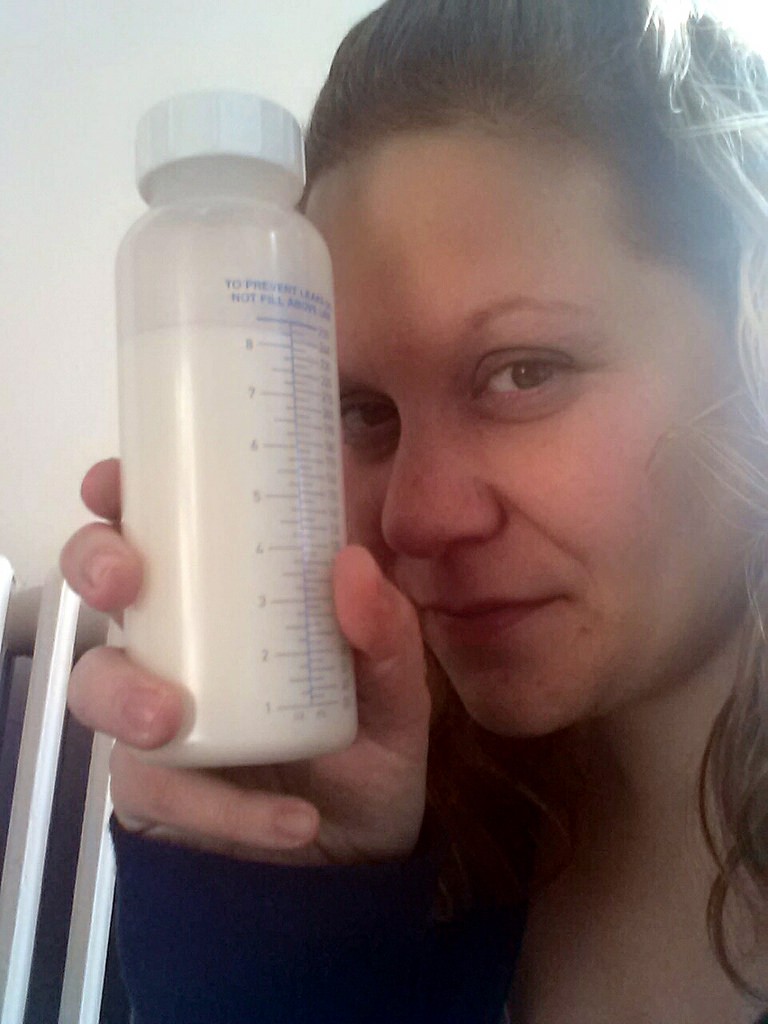 There are some companies that have rooms with comfy chairs and private fridges for nursing moms. I was not that lucky. At my first job, I had a private office and could pump behind a closed, locked door. At my second job, I first pumped in a storage room. We locked the door and the secretary kept watch to make sure no one came in. There was an adjacent bathroom, so that was convenient.

For my third baby, I pumped on the floor of an office bathroom. There were many, many odd moments doing that. It was the office of the school psychologist, who often had students. I had to knock and ask permission each time. Once a student came in while I was in there and my pump was making it’s whirring noise as she cried to the psychologist about some trouble she was having with classmates. There was also no electrical outlet, so I had to run my cord to the nearest outlet outside the bathroom, which meant I had about 2 feet of slack and was relegated to the floor. Ick.

I pumped every 2-3 hours depending on how much water I had, how much milk I pumped on the way to work and how full I was getting. You’ll know when it’s time. Even if you don’t think you need to pump, do it anyway, because like I said in the Developing a Good Breastfeeding Routine post, it’s all about supply and demand.

Every day is different. Sometimes stressed, lack of water or exhaustion will bring down your supply. If you have an off day and only get 5 ounces when you typically get 8 while at work, don’t stress, it’ll only make it worse.

If your supply is off for a few days, consider adding in a pumping session or let baby nurse a little longer when you are at home. Supply and demand!

They Are More Afraid of it Than You Are

My husband got suite tickets to a Lions game while I was breastfeeding. We decided to go as a date night, with my pump as our third wheel. We ended up driving some friends to the game so pumping in the car was really not an option. That meant my pump was going in. I was so nervous and almost whispered it to the security woman. But then I realized it made her more uncomfortable than me. She had to open it and look in the bag and swabbed the residue to make sure it wasn’t an explosive.

Sadly, I was forced to pump on a bathroom floor, but I survived.

Pumping conditions are often less than ideal. Pumping itself is no fun. But it’s necessary for maintaining your supply and also feeding your child. Find what works for you, but hopefully my pumping tips give you somewhere to start!

Read more of my breastfeeding series: 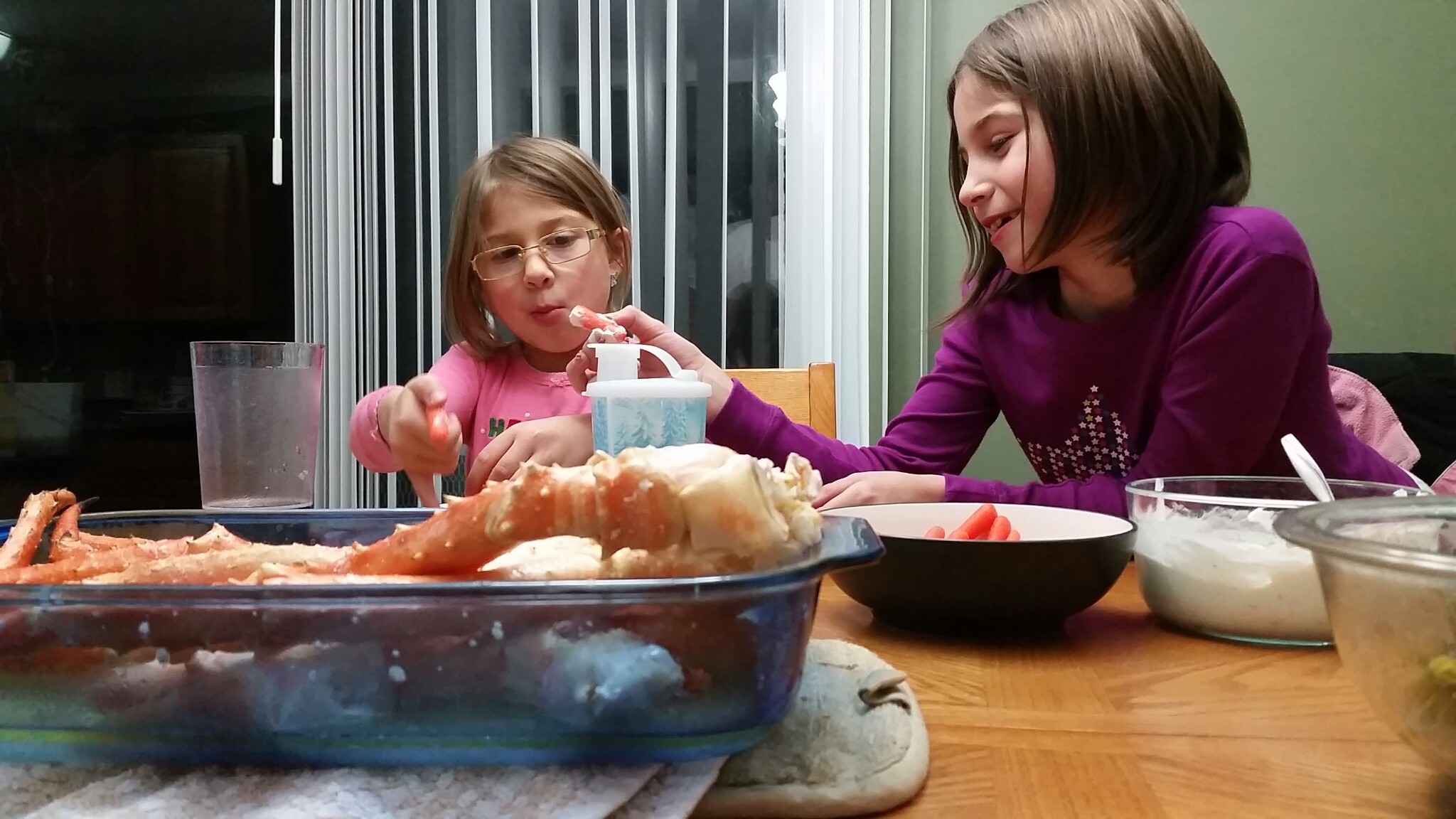