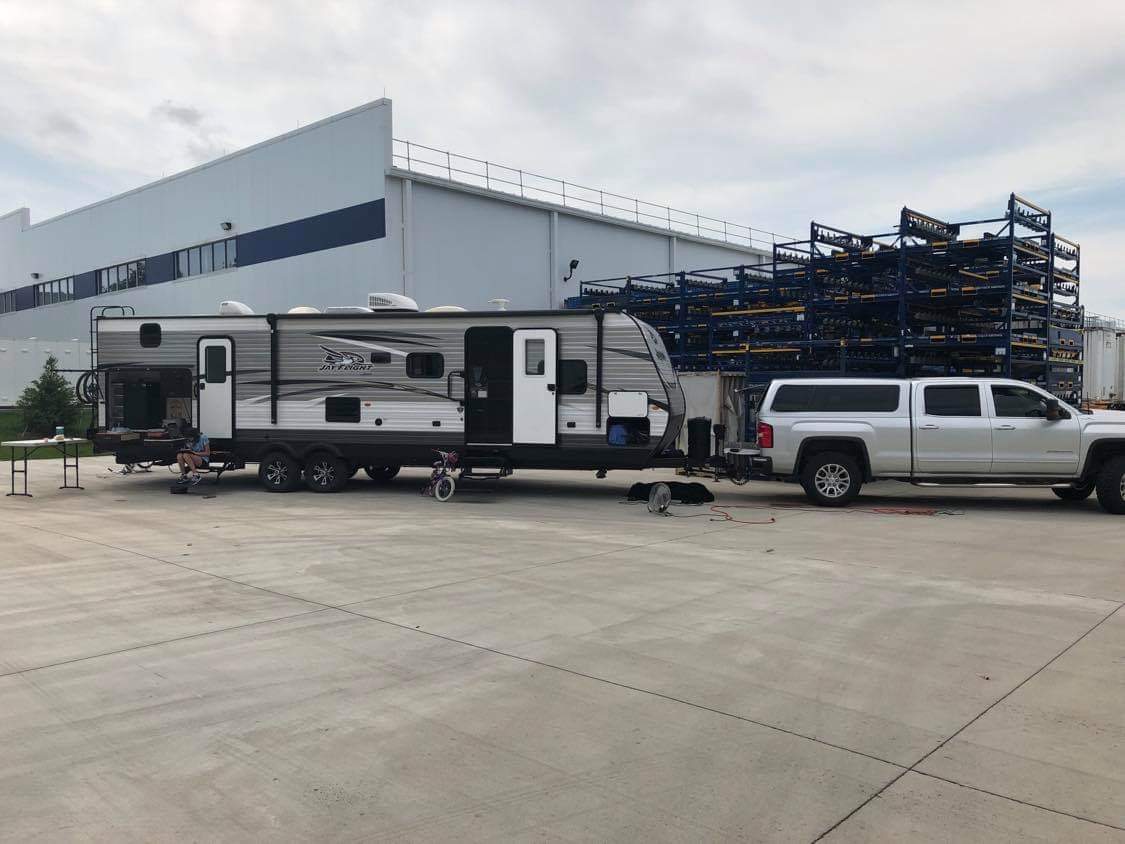 I have several unwritten rules in life.

There are many, many more rules, but for the purpose of this blog, I won’t send you into my self-inflicted list of impossible life rules that makes me the anxiety-ridden person that I have become.

So, continuing from my last post, we arrived in Blue Springs, Missouri earlier than we expected. As I said, the drive was so smooth. No one needed to stop incessantly. The dog only needed out once. Our gas/potty breaks were effiecient and we didn’t need to get food anywhere.

Once it became clear that the drive was only going to take us 14 hours, I called the campground we were staying at, the Oak Grove KOA. I explained our situation, but they didn’t have sites available for us to come in early. I mean, it was a holiday weekend.

Our plan B was to boondock somewhere. We’ve stayed in truck stops, Walmart parking lots (free gas cans! that’s a story for another day), rest areas, wherever we need to get a few hours of sleep when we are exhausted from traveling all night. This was different. It was 8 p.m. (CST-in case you were wondering how we got in a 14 hour drive in 13 hours) and our site wouldn’t be ready until noon the next day. We had kids with pent up energy and a giant dog.

My husband called his plant manager and he gave him the OK for us to stay in the back area of the plant behind a locked fence. We manuvered our camper to the back, found a spigot and got some water in the tanks so we could wash hands and flush toilets. We found a spot in the parking lot that wasn’t flanked by security lights, and we temporarily settled in for the night.

We had picked up some dinner from Rancho Grande Cantina, which is one of my husband’s favorite Mexican places down here. It was good. Thin, crisp tortilla chips, deliciously blended salsa and those shrimp fajitas were so good that I’m still dreaming of the flavor.

The entire time we were eating, the kids were complaining about how hot it was inside the camper. It was warm, and even with all the windows open, there wasn’t really a breeze to cool it off. No power meant no air conditioning and nothing that didn’t run off 12 volt power. One thing we lack? a 12-volt fan.

I checked the weather and it was 83 degrees and dark out. Ugh. Just two weeks ago, it was snowing at home! I was not prepared for this temperature shift. I laid down in our bed and quickly realized that sleep was not happening. First of all, I was sweating. Second, the dog was panting so hard it was rocking our camper back and forth. Seriously. We didn’t have jacks down because this was a quick, overnight stay, but I was going to wake up seasick if I didn’t do something about the dog.

I got up and took him outside. It was cooler and he could lay on the concrete. He finally calmed down. I finally calmed down and we quickly snuck back inside as not to wake our sleeping family. I took two Xanax, a swig of wine and slept until the morning.

When I woke up, I was sweaty. We didn’t have the water for a shower and I was really hoping that time would pass quickly so we could get on to our actual campsite.

My husband got out his cooking tools and was able to use our campstove to make bacon, eggs and hash browns. The day was already heating up.

I was going to have to break another rule.

I had slept under conditions that don’t make my unwritten rule cut and now I was a sweaty uncomfortable mess. My best option was to put on the clothes I had worn the day before. They weren’t dirty. All I had done was sit in the truck, but I was. And there was no point in getting out clean clothes, only to feel disgusting in my own skin.

So there it was. I broke rule number three. I was off all day and I attribute it to breaking rule number three. My kids break this rule all the time and they are perfectly fine, but not me. Oh no. One time, I was visiting my parents who were camping sort of nearby. After a late night, my mom said, “Just spend the night.” I said, “I can’t because I didn’t bring any fresh underwear.” And then, I drove home where I slept in a climate-controlled environment and woke up to put on fresh underwear.

Just as I’m contemplating this huge malfeasance of wearing my underwear two days in a row, my husband said, “The prep crew for the plant has started to arrive. We should probably get going. While the plant manager approved it, I’m not really sure the global company would allow us to boondock here.”

Now he tells me. Thank God he didn’t tell me the night before or the crushing guilt combined with the heat (my God the heat) and even the Xanax/wine combo wouldn’t have been enough to silent my brain for the night.

If he had apprehensions about us being there, why did he open up the outdoor kitchen, set up our portable table and make breakfast when we had cereal? If he didn’t want people to know we were living the life of luxury in the company parking lot, why did he get out the kids’ bikes? Oh my goodness!

We didn’t rush out, but we did pack up, close up and make our way to the K-O-A.

And that is where our story will pick up….tomorrow.