As we arrived at the start of the Susan G. Komen 3-Day, I tried not to let the nerves overtake me. I didn’t want them to wash me away into that vastness of my head and wreck a perfectly great experience, turning into a giant anxiety attack that wouldn’t end for three days. In short, I wanted to enjoy it, even if I was walking 60 miles.

I was so thankful to be walking with a friend who had done this before. She had prepped me on what to expect and reading the 3-Day blog, I felt like I had a good idea what was about to happen. Get our badges, check our bags, stretch, walk.

And that was pretty much what we did. We taped up, we stretched and then we walked.

This is what my feet looked like that morning. In retrospect, I’m so glad I took this photo. 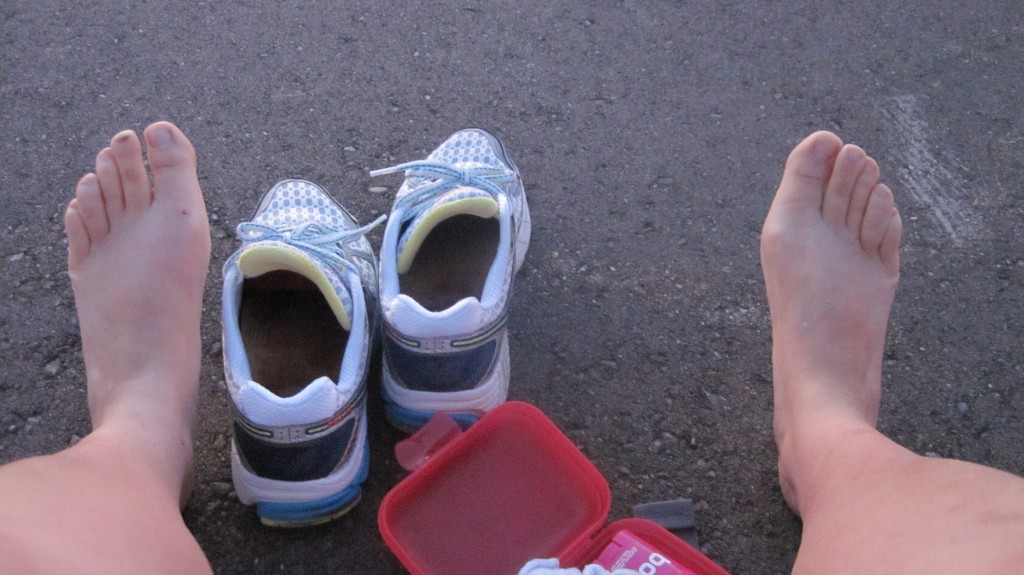 After a bit of cheering and getting us pumped up, the 3-Day crew sent us on our way. Imagine nearly 1,000 people walking out of a driveway and down a sidewalk. It was a little crowded and really, in front of us, all I could see was a sea of pink. My walker partner assured me that we would space out as soon as the first pit stop, which was noted as about four miles away.

It was hard to believe that the world was going on around us. People in the cars driving by us were going somewhere and we were tying up the light trying to get our group through the intersection. We were those wacky walkers in pink. Some probably wondered where we were going or why we were walking.

In the midst of real life though, there were people supporting us. They were people in subdivisions thanking us for walking and handing out candy. They were business people camped out at little tables near the entrance of their company giving us water. They were cars that honked and waved. It was hard to believe that they were taking time out…for us.

We hit out second rest stop, quickly refilled and rested and set back out. Lunch was in a park and it was Panera Bread. Yum.

It was at lunch that I discovered I had blisters. Big blisters. On the first day. I was discouraged. I knew I was going to have to get through the pain for another 2.5 days. I taped them up and set back out.

Another two rest stops and we were in the home stretch. The time between lunch and the final rest stop was the hardest for me. The route was boring. I was tired. I had blisters. As we finished the last rest stop, I was tired, but I knew that camp was near. I tried to distract myself from the pain by dancing along with the music other walkers had blaring from their speakers.

As we walked up to camp, I could barely contain my excitement: food! sleep! showers! rest! We made it in, took a picture and headed directly for the Bank of America tent. With few people there, we were able to take advantage of the massage chairs. I got a look at my blisters and just hoped that wouldn’t pop. The massage and pressure helped break up the monotony of walking all day.

Once I was up and moving again, I headed over to the mail tent and retrieved the cards that had been sent to me. I was so excited to read them, but I wanted to wait. I wanted to savor the words and the thoughts.

We went to camp and got our tent. Setting it up was easy and there was plenty of power for filling up air mattresses and charging cell phones, both of which I did.

My friend and I went to eat dinner, showered and then I headed over to the medical area to try and get some relief for my enormous blisters. The nurses just suggested sleeping with my feet up and not lancing them until the morning. I was frustrated and sore, but instead I showered and turned in to read my letters and call my family.

I was so tired that even sleeping on an air mattress in a tent was cozy.

I did have a hard time sleeping though. I was in a weird place. I was in pain. I was overtired. I was restless. I was up off and on throughout the night and even paced around for a while just trying to get my mind to stop racing.

Before I knew it, Day 2 was dawning.