We hit on the one-year anniversary of our Norwegian Getaway Western Caribbean cruise and I never finished writing about my experience. So I’m diving back in, just in to time relive what I was doing then through the magic of Facebook Memories.

Our third port of call was Costa Maya, Mexico. We had a big day planned there as we had to meet our excursion leader at 8:45 a.m. and weren’t slated to return until about 45 minutes before we needed to be back on the boat. 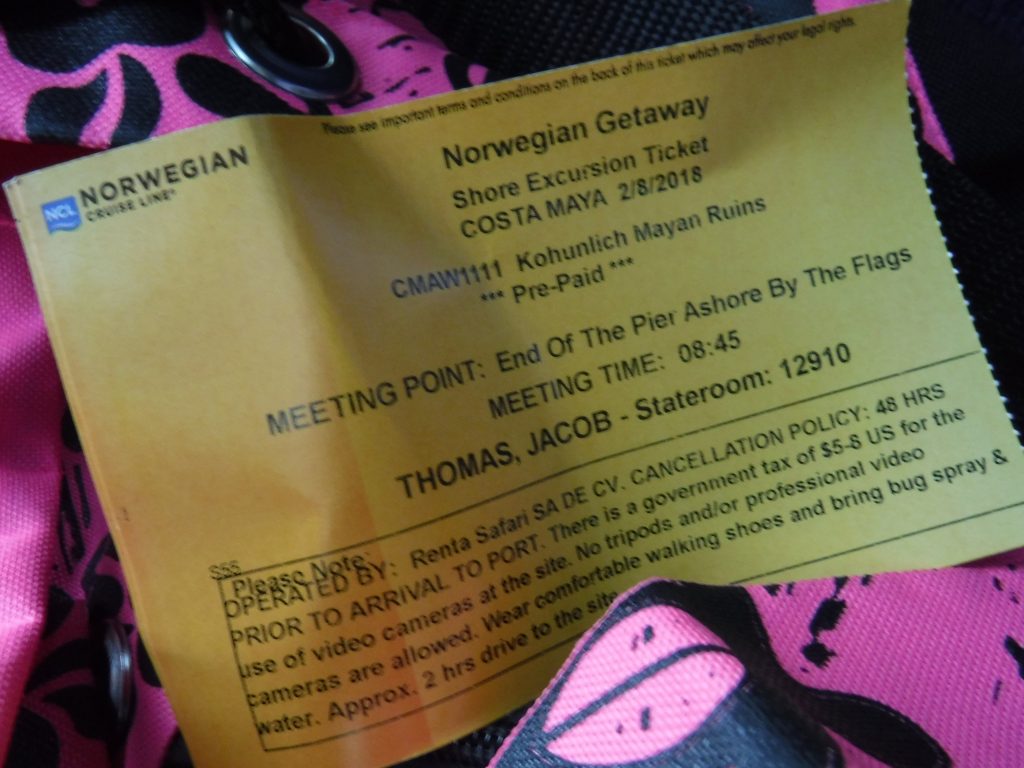 We had a few minutes to browse a bit in the shops before we had to join the planned tour, which was a trip to the Kohunlich Mayan ruins.

This excursion had me a little on edge. It was a 2 hour bus ride to the ruins, 2 hours to explore and then 2 hours on the bus back. I was pretty sure I could find a better way to spend six hours, but we really wanted to see the ruins, and this was the only way to do it.

We had a charter bus for the ride there and back. It was awfully nice to sit in the cozy seats, air conditioning and just relax for a bit.  I think we all slept at some point during the drive. What? Cruise life is a busy life without a lot of resting going on.

As we boarded the bus, we were each given a brown paper back with snack, including a banana, nuts and a chocolate bar and also a bottled water. The guide talked for most of the drive, telling us about the area, passing around maps and documents and giving us information about the ruins we would see.

Once we got there, the guide took us around to different areas, told us about the structures, what they may have been used for and showed us how the Mayans would build over them in generations to come. It was amazing to see how delicate these structures were, yet how complex and strong they must be to stand for so many years.

Oddly, I can compare it to other Mayan Ruins

I’ve been to the Chichen Itza ruins several years ago. It was definitely much bigger, however so was the tour. This tour was small and personal. We could ask questions and get up close. Also, Chichen Itza was a little more “commercialized” in a way that only Mexico can be commercialized. There were vendors selling their wares all around Chichen Itza. It was covered with tourists and buses. Kohunlich was much more like a state park or monument park might be here in the United States.

Oh! And I got to see my first tree monkey in the wild!

We looked around for a while and then reboarded the bus. The path to the bus was a dense jungle area. We saw TWO monkeys playing in the tree. It was so neat to see them in their natural habitat.

On the way onto the bus, the driver handed us a ham and cheese sandwich. Um, no. There was zero chance that I was eating a lunch meat sandwich wrapped in plastic wrap given to me by a bus driver I didn’t know. Who made it? Where did the lunch meat come from? Is there a Mexican version of the FDA? So I didn’t have a sandwich, but the rest of my group did and they didn’t die! It’s probably safe.

The drive back to the boat was though these small Mexican villages. There were people on the road selling pineapples and handcrafted goods. I began to feel guilty…for two reasons.

As we made the drive back to the ship, I felt guilty. How did I get so blessed with the life I have? How different would it be if I had been born among the poorest of the poor. There I was on an air conditioned coach bus watching a movie on my phone as we drove back to our cruise ship and our fancy restaurants and balcony room.

Back on the boat

After we arrive back at the port, we had about 30 minutes before the ship departed, so we browsed through some of the shops. I bought a few t-shirts for the kids and we made our way down the very long pier back to the ship.

It was only about 4:30 p.m. and we had an 8:30 dinner reservation at Tepanyaki, but we were hungry, so we decided to have a pre-dinner snack at the buffet.

*This was another “pay” restaurant. So we had several dinners included at the premium restaurants for free. This one, however, was one over our package, so we had to pay for it…and it was 100 percent WORTH IT!

DSCF3504 from Rebecca Thomas on Vimeo.

The service for drinks and the like was slow, but the food and the griller were amazing. Our chef, Emmanuel, was entertaining. He did lots of cool things, like drawing a flower in egg yolk, making an onion volcano, and shaping the rice like a heart. We were four people sitting at a table for 8 but he still gave us the extra food. 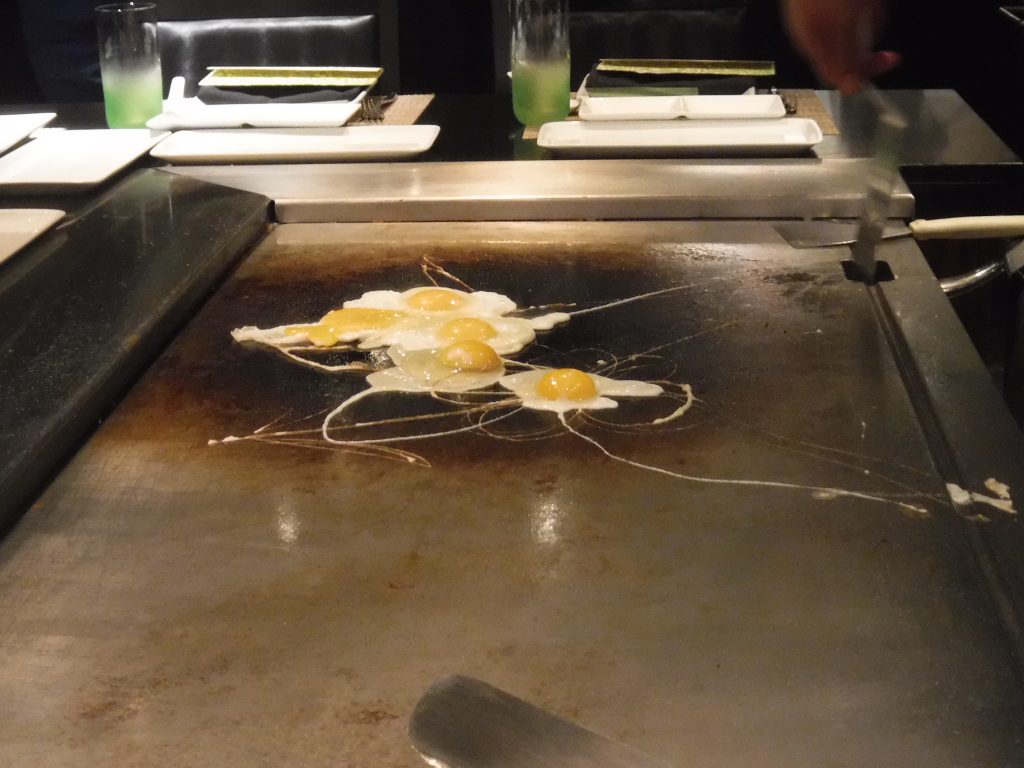 We had fried rice, veggies, meat and even fried noodles. It was all amazing. He even did origami for us! 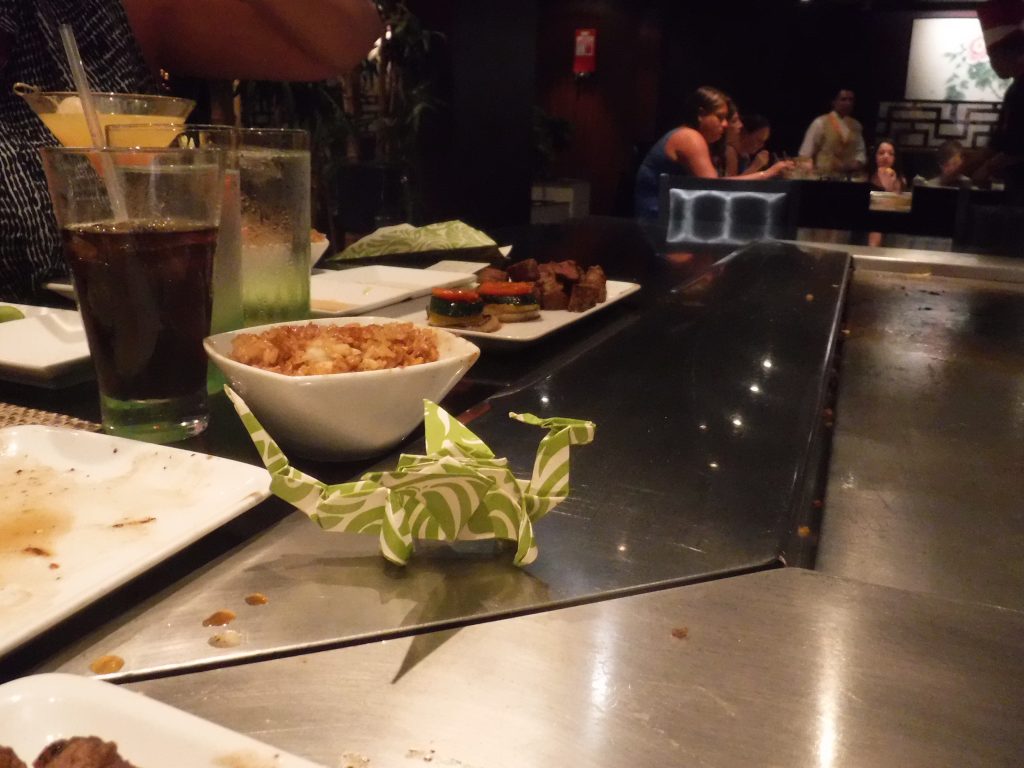 This was the second night that they ship was moving and we could actually feel it. It was windy so we had some rough seas. Of course, I was wearing a scopolamine patch for seasickness, but that still doesn’t easy the anxiety when the boat lists from side to side a bit.

After dinner, we did my favorite cruise activity—checking out the pictures. I was narrowing down the photos I wanted to purchase. I didn’t like any we had taken the day before.

We ran upstairs to the buffet to get dessert as there was ice cream up there and a variety of cakes. Since we were celebrating my birthday on the cruise, we also had cake in our room. There was so much dessert all the time!

We ended our night by spending some time on the balcony, talking and I was doing some writing. It’s hard to believe our trip is half over, but at the same time, we are exhausted from all the amazing activities on the Norwegian Getaway.

Check out all of our cruise posts!